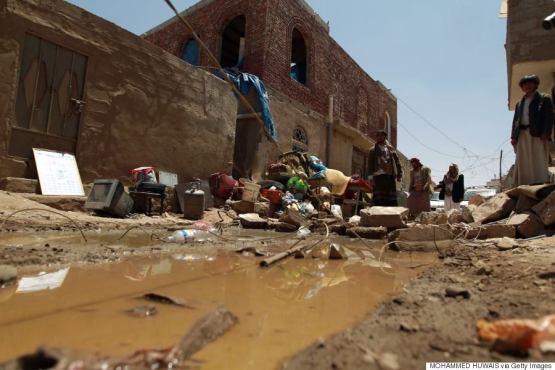 After nearly 1,000 days of conflict, the crisis in Yemen has resulted in one of the largest hunger crises in human history, claiming an unprecedented number of lives, and made worse by a cholera outbreak. Now, 27 million people, equal to over 1/3 of the population of Britain are in urgent need of aid. The only accurate imaginable comparison is with fictional District 12 in the third Hunger Games film (unimaginable suffering and destruction, for those unfamiliar with the franchise). With all this turmoil in one of the poorest countries in the Middle East, it would be logical to have seen some form of international response; but what if anything is being done about this quickly escalating crisis?

Since November 6th a Saudi blockade had been in place preventing all humanitarian aid from entering the country, following the launch of a missile toward the Saudi Capital. Many reports have claimed that the blockade was intended to prevent arms from reaching Houthi Rebels within Yemen, however Saudi Arabia’s true intentions are arguably up for debate. But whether the escalation of the crisis owing to the blockade is due to: regional and religious insecurities or fears over southern borders, this blockade has meant that a population in a country already deprived of resources is severely suffering under another power measuring contest between regional powerhouses.

The crisis was already at boiling point prior to these recent escalations following a civil war which has been ongoing since 2015. It began after a Houthi overthrow of President Abd-Rabbu Mansour Hadi. Before the war 44% of the its population were already undernourished, so famine and humanitarian crisis is nothing new, but they were worsened by the 2011 Arab Spring and Tunisian Revolution. This led to protests against the then president Ali Abdullah Saleh, who could possibly be seen to have contributed to the famine. Thus, a chain of events followed ending in the Houthi Rebels removing Hadi in 2012 which ultimately led to massive food insecurity and terror attacks. Since 2015, violent non-state actors have weighed in, with Hezbollah committing troops to the rebel cause. To make matters worse the Saudi led coalition, with the aid of the US has been seen to bomb Yemeni citizens in October owing to the suspected link between the Houthi Rebels and Iran.

Amidst all this violence it appears that not only the domestic multi-party war, but also the underground war between the Sunnis and the Shia, seem to have led all those involved to forget that Yemen is a country, with a civilian population. From an outside perspective, it would appear Yemen has become an arena in which international and regional politics can be fought out not only within but over, with the increasing use of aircraft bombing and missiles. This leads me to ask…with all that attention on the relations between the US, the UK, Iran, and Saudi Arabia with regards to the civil war, why did we as an international community neglect Yemen’s population?

It can be argued that there were fears that, had there been forced intervention directly within these countries by foreign governments, another Syria would be created. With so called Islamic State already having a foothold in the west of the country, Yemen was forced to remain trapped in limbo, with much of its population on the verge of death; whilst the international community waited for Saudi Arabia to lift the blockade, perhaps hoping naively that this powerhouse war would come to an end. It has to be highlighted that perhaps Saudi Arabia’s fear of weapons reaching the rebels were legitimate, especially with the creeping presence of IS within the region. However, it was unfairly excessive to leave men, women and children in conditions far worse than humanly imaginable.

Finally, on the 25th of November, almost 20 days after the blockade was put in place, aid was allowed into the country. The first shipment contained UN aid with 1.9 million doses of vaccines, followed by UN and International Red Cross aid workers. The reopening followed a review by the Saudi coalition to ensure that weapons do not reach rebels. Despite the fact that the lifting of the blockade appears to be a step forward, the conflict rages on and there are still, and will be, thousands of innocent victims in a conflict caused by a historical division between two rival Middle Eastern powerhouses. So as the fog lifts and the planes arrive, what many aid workers are welcomed by is not only a warzone, where countless human rights abuses have occurred in a matter of days, but to a graveyard where people are slowly but surely making their way to the ground.

Why then, I ask, has the situation been allowed to get so dire, with the international community’s emphasis on humanitarian intervention and protection?

With the chaos and devastation that so many people have witnessed at the hands of their own government and foreign entities, it seems that Yemen has taken its place as district 13, bombed and now a mere façade of the country it was following at its establishment during the Cold War. Much like the founding of the district system In Panem, a country that was formed in the ashes of a warzone, Yemen was created in an unstable region, this was arguably bound to erupt. Why then, if this seems so obvious did we allow the citizens to suffer inhumanely as a result? The answer…because of the world is selfish. Much like districts 1 and 2, we remain unaware of the upheaval taking place globally because our news is filled with political scandals, with politicians placing their… egos on things and people that they shouldn’t. These issues are clearly important with the need to eradicate locker-room and “manly” behaviour becoming ever more paramount with every 140 characters posted, but issues that are equally important are side-lined too often. With the development of the 24-hour news cycle it is baffling as to why we don’t prioritise every story. Yes, seeing images of young teenage girls whose cheeks have receded so much that she looks as if she has already walked through death’s door are not ‘pleasant’ to wake up to, but surely awareness of people like Saida Ahmad Baghili, is more important?.

So, it seems clear that the Yemen crisis is so much more than the ongoing civil war and the recent lifting of an aid embargo. It appears to me, coming from an outside perspective that the crisis reflects something deeply ingrained into our international system: a priority of importance with regards to the actors involved and certain types of scandals. What needs to happen is a more hands on approach to ensure that even when regional politics may mean that intervention could cause a series of mean tweets or even possible military backlash, the lives of innocent people who are trapped in an inescapable crisis, owing not only to regional state conflicts and domestic civil disagreements but also a lack of global empathy, are prioritised. Without the acknowledgement of the images we see of living skeletons, the Yemeni population will remain caught in the crossfire not only between Saudi Arabia and Iran but between the selfishness and truth.