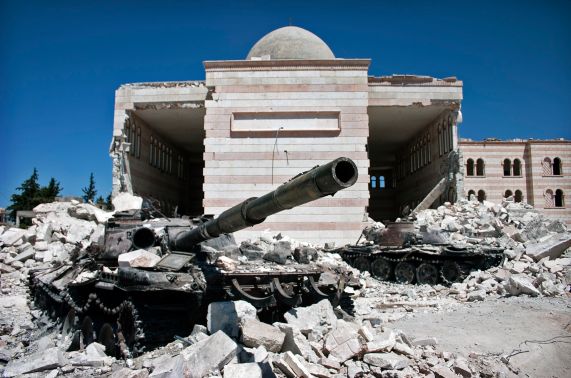 Nearly 7 years have elapsed since the Syrian Civil War began. 7 years during which half a million people found their untimely death, according to the Syrian Observatory for Human Rights. To this horrific number must be added the 7 million Syrians that are currently internally displaced, and the 5 million Syrians that became refugees, with demographic consequences seen as far as Germany. It would be unreasonable to attempt to make sense of this tragedy as of yet, however I will underline some of the lesser known contributing factors to the conflict, and try to shed some light on the confusing peace process that has occupied a preponderant spot in the media recently.

When the conflict erupted in 2011, Syria was emerging from a five-year drought, the most intense one ever recorded in the country. This led to widespread crop failure, with many Syrians now struggling to afford food. Farming families also relocated to the cities in search of employment, the very cities that were already strained by the 1.5 million Iraqi refugees from the war in Iraq. These many factors made the socio-economic context in Syria very difficult, especially on the youth. With an unemployment rate six times higher among the youth as it was among older adults, it is easy to see how the unrest in 2011 and the subsequent armed conflict provided an attractive escape from the harsh Syrian realities to the marginalized youth. Groups such as the Free Syrian Army, the Syrian Democratic Forces and eventually ISIS found many hands in which to place the weapons that destroyed Syria. Speaking of ISIS, Bashar al-Assad released a significant portion of the group’s current leadership from jail in 2012 in order to tinge the rebellion with extremism, hoping that the legitimacy of the rebels would crumble, without foreseeing that the extremists would eventually go on to form their own organization, and further exacerbate the conflict. This dangerous development led to direct involvement from the United States and Russia, whose sheer firepower cemented the destruction of Syria. It is also important to note that these two global powers are not the first countries to become involved in the conflict: Syria has served as a battlefield for the ongoing Iran-Saudi Arabia proxy conflict, with Iran and Hezbollah directly assisting the government’s efforts, and Saudi Arabia supplying rebels with logistical and military support. As you can see, there are many factors at play, making the Syrian conflict an extremely complex one to solve peacefully.

With the Syrian opposition boycotting the Sochi Peace Conference, and Western Powers insistent that they will not accept a solution for Syria that is not UN-brokered, the ongoing talks look more like a Black Sea party for Assad and Putin than anything else. Nonetheless, the United States are backing down from the conflict, part of Donald Trump’s “America First” policy. This paves the way for Russia as the major power broker in the region, hence why they are organizing their own peace talks in parallel to the UN talks in Geneva. Furthermore, Russia is not keen on seeing its Syrian ally Assad leaving power, a condition that is a prerequisite for any peace deal, according to the opposition, hence the boycott. Another notable absence at Sochi, that further undermines the legitimacy of the entire enterprise, is that of the Syrian Kurds, instrumental in the fight against ISIS, and who still hold a quarter of the total territory in Syria. Their absence is a response to the Turkish incursion in Afrin, meant to curb feelings of independence both in the Syrian region and in Turkey. With ISIS rapidly losing ground and the US backing off from the conflict, peace would seem a more attainable goal, but the diverging goals of the many nations or actors involved in this proxy conflict and their flagrant disregard for the maintenance of stability dress a bleak picture for Syria.

It can be speculated that so long as the rebels, the government, and a UN delegation are not the only 3 parties present at the negotiation table, the context will never be stable enough to foster a lasting peace. This means the end of direct foreign interests, military or otherwise, in Syria and clear, definite borders (emptying the last ISIS pockets and determining the status of Kurdistan). The rebels have one clear demand: that Assad vacate the authority his family has held over Syria since 1971.  However, time is more than ever on the Syrian president’s side, with his ally Russia inflicting damage upon ISIS and the rebels’ international support rapidly plummeting (USA withdrawing from the conflict, and Saudi Arabia concentrating on the war in Yemen). In any case, and although this seems an unlikely scenario, Bashar al-Assad vacating the presidency would mean a deep overhaul of Syrian politics and government. It has been proposed that Bashar leave to let a member of his administration succeed him, in order to maintain some sort of stability during the post-war era and to quell the rebels’ demands. But Assad is more than a Ba’ath Party politician – he IS the party. Hence, change in Syria will either be total and far-reaching, or unnoticeably minor. The only certainty is the destruction that has occurred in the country.

Special thanks to Manaf Safarini and Pr. Ibrahim Halawi from the department of Politics and International Relations.

One thought on “What now for Syria?”