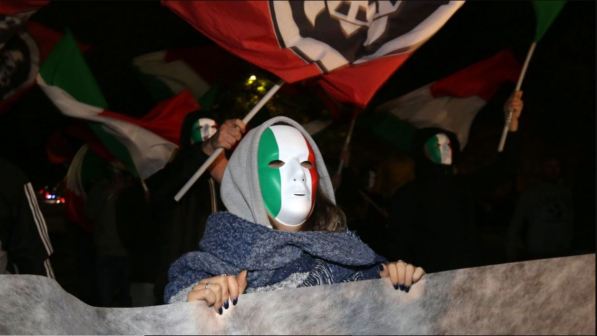 Interesting political times are anything but over. The upcoming Italian general elections seem bound to shake again both national politics, and the politics of Europe at large. As in several other countries, and especially due to the impact of the refugee crisis on its shores, the populist wind blowing throughout Europe has found in Italy an especially receptive audience. Two out of the four main parties running can be considered ‘populist’, with the Five Star Movement (which supposedly has no political colouring) and the Northern League (which has a very dark political colouring) respectively making use of the anti-establishment and anti-immigration rhetoric; and finding common ground on their vigorous Euroscepticism. Immigration, specifically, is the issue most heavily discussed in political debates and the one most likely to be driving Italian votes. Like elsewhere in Europe, the ‘economic cleavage’ of working class and white-collar voters is being superseded by the ‘cultural cleavage’ of those who support cosmopolitanism and multiculturalism and those who do not.

Amongst the parties running for parliament, the centre-right coalition certainly holds issue-ownership over immigration – especially given that the Northern League has been campaigning for tougher immigration laws and repatriations for decades, along with the neo-fascist party ‘Brothers of Italy’. On the other side, the centre-left coalition is rather hesitant and divided on the matter. It hosts the small ‘+ Europa’ party which, as the name itself says, wants greater European intervention and an increased flow of people, as well as the main Democratic Party, which is ideologically positive towards immigration yet careful about making supportive statements due to the high opposition amongst the public. Outside of the two main coalitions are The Five Star Movement – which has also refrained from making explicit comments or taking a position on the matter and is mostly concerned with fighting corruption – and ‘Liberi e Uguali’ (literally ‘Free and Equal’), which originated as a disillusioned splinter group of the Democratic Party and focuses mostly on education, employment, and the environment.

Given that immigration appears to be the issue Italians want tackled the most, it is also the one that has most inflamed political debates over the past few months – if not years. A recent episode has made it especially more relevant: a few days ago, in a small town in central Italy, a self-declared fascist and former Northern League candidate, wrapped in an Italian flag, has embarked on a killing spree of African immigrants around town – fortunately not killing anyone, but wounding six. The supposed reason behind the attack is thought to be the murder, a few days earlier, of an Italian girl allegedly killed by a Nigerian man and possibly involving drugs. It is not the first time a similar episode has taken place in Italy. In summer 2016 an Italian man killed a Nigerian immigrant guilty of having spoken up for his wife after the murderer started insulting her on the street.   However, what are clear and recurring manifestations of fascism and xenophobia are not being called as such by political authorities. On the one hand the Right exploits each instance in its favour, claiming there is no such thing as fascism but instead a national exasperation after years of ‘intensive’ immigration eroding the social fabric of the country. On the other hand the Left is failing to call racist and xenophobic acts for what they are and to properly explain and discuss immigration for fear of losing votes.

The situation becomes all the more problematic considering that even if the Right has often asserted its position on the matter, they have not provided clear solutions on how to tackle immigration, and claim they want tougher controls and repatriations, yet have refrained from saying how this is going to happen. The Left, on the other hand, is ideally in favour of immigrants but in practice very quiet about it, and the Democratic Party did not even attend the demonstration held to condemn the most recent racist attack.

As Roberto Saviano puts so well in a recent article in the Guardian, “social phantoms always emerge in moments of crisis. Hatred of the foreigner is the result of a lethal cocktail of bad politics, irresponsible information and economic crisis”. Immigrants, along with those who have ‘allowed’ them to come in such large numbers, are perceived to be the sole cause of the Italian deteriorating economic situation and terrorist threat – notwithstanding that the only attack that could be considered a genuine massacre was perpetrated by an Italian against foreigners. Few are attempting to discuss figures and numbers of how many immigrants there actually are and what their real impact is. What is discussed instead is feelings. How we Italians feel is more important than facts, and politicians are making their calculations and designing their strategies accordingly.

Journalists and political figures are being urged not to express their views on contemporary manifestations of racism and xenophobia in order not to further polarise the electorate. Yet when the extreme right purposefully makes use of an anti-immigrant rhetoric clearly influencing such despicable acts, and no counter voices are heard or sought for, very dark times in history come to mind. Dismissing a politically motivated murder as the ‘act of a madman’ whilst disregarding its evident relation to fascism and the contemporary extreme right is especially dangerous considering that the Northern League – a party that can quite confidently be considered the ‘moral sponsor’ of such episodes – is set to win the upcoming election along with the rest of the right-wing coalition, and possibly obtaining almost as many votes as Berlusconi’s ‘Forza Italia’. The latter, attempting to further appeal to the more conservative cohorts of the population, has claimed that should they rise to power, first thing on the agenda is scraping the ‘Civil Union Act’ passed last year, which grants homosexual people the right to enter a legally recognised relationship with their partners. Italy, the last country in Europe to grant its citizens such right, is likely to be the first taking it away, thus feeding the concern expressed by many both within and outside the country about the future of our civil liberties.

If immigration is what Italians want tackled, regardless of whether that should actually be the priority, the Left needs to find its position on the matter and express it openly. With the rise of the internet, information has become a commodity; media outlets publish and broadcast news that sells, making increasingly vehement reports about increasingly exaggerated conflicts. This results in a rather uninformed electorate that inevitably bases its political decisions more on gut-feeling than on sound economic, political or social consideration. It is time for the Left to wake up from its passive acceptance of such a dismaying situation and to start mobilising its voters again. Parties were created to close the gap between citizens and political institutions, making the former participate in the workings of the latter but also helping shape people’s views and opinions on things they would normally not be concerned with.

What is needed is an informed discussion about the current economic and political situation of the country and a recognition of fascism and xenophobia for what they are. Italians, like many others in Europe, seem to have forgotten their past, and if no one engages in an open discussion and condemnation of such acts and statements, the danger is that they will persist and possibly increase or be normalised.

One thought on “Italy at the Polls between Violence and Silence”