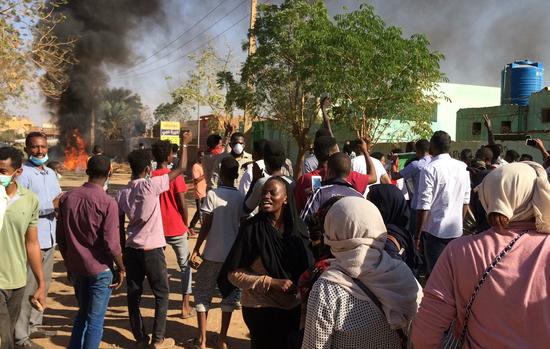 The 2011 Arab Springs shaped much of the contemporary Middle East and North African (MENA) region, but the large, mainly desert country of Sudan appeared to be unaffected. That is until now. In the past four weeks we have seen increasing tensions within the country as protestors take to the streets, speaking out against current President Omar al-Bashir.

Bashir himself has been in power since he led 1989 coup against the government of Prime Minister Sadiq al-Mahdi; since then, President Bashir has been indicted by the International Criminal Court (ICC) for directing a campaign of mass killing, rape, and pillage towards the people of Darfur. More recently, Sudan has also been defined by its relationship with South Sudan, a country that gained independence in 2011 after a long civil war with the government in Khartoum. South Sudan’s sovereignty has in no way meant peaceful relations between the two states, despite the north’s immediate recognition. The two Sudans came into conflict in 2012 when the south occupied the Heglig oilfield, an area accounting for nearly half of Sudan’s oil production. Khartoum was eventually able to take back this area and came to an internally brokered agreement with South Sudan. However, there continue to be contested areas between the two states.

It’s important to note that the majority of Sudan’s oil reserves were located in the south, and as such, became the possessions of South Sudan after independence. Oil profits are a critical part of the Sudanese economy, making up over half of the government’s revenue, as well as a whopping 95% of Sudan’s exports. With this in mind, it’s not hard to see why the secession of South Sudan created economic shock in the north, an economy based almost entirely around natural resource exports. While in 2017 the US lifted all of the 1997 economic sanctions imposed on Sudan, the country remains on Washington’s list of state sponsors of terrorism (although the US has agreed to discuss the possibility of removal). This is a problem for the Sudanese economy as it prevents real foreign investment in the country. While sanctions have been lifted, the economy of the North African state continues to decline. All of these factors have allowed dangerously high levels of inflation to spread throughout the country, as of January 2019 inflation has reached almost 70%. As of writing, the exchange rate is 1 USD to around 47 Sudanese Pounds. As late as January 2018 the exchange rate was nearer to 1 USD = 7 Sudanese Pounds.

In an effort to combat the economic downturn, Khartoum ended government subsidies for fuel and wheat, igniting anger from many (the Prime Minister has since ruled out cutting these subsidies), however, the protests we’re seeing at the moment find their origin in rising bread prices. Bread is a core staple in Sudanese society and the rapidly increasing prices of this integral food product may have proven to be the last straw for the Sudanese people. Economic strife provides a ‘powder keg’ to the political situation of the country, especially combined with President al-Bashir’s commitment to stay in power. Bashir announced that he would be running for re-election in 2020, a move supported by a change to the constitution by the Sudanese Parliament. Bashir has ruled the country for 30 years, however, his authority as the head of state has been significantly eroded by the economic crisis. He’s also seen by many as the President who lost South Sudan (and much of its critical oil).

Current protests started in the eastern city of Atbara as a result of the rise in bread prices. The Sudanese state failed to end the protests, allowing them to spread to other parts of the country. We’re now seeing protests erupting all over the country, in areas such as Port Sudan, Omdurman, and even Khartoum itself. The protests themselves don’t appear to have an organised centre, although they have received support from the national opposition parties. One such group, the Sudanese Congress Party, saw its leader Omar el-Digeir arrested several hours after protests started in Omdurman. There have, however, been echoes in these new protests of the 2011 Arab Spring. It is reported that protestors chant “the people want the downfall of the regime.” Whether or not this will actually happen remains to be seen. What we have seen, however, is a continued escalation of violence within the country, with an estimated 24 people killed, and over 800 people arrested. The Bashir government has a considerable military edge in any conflict with protestors, a vast amount of the government’s budget is on defence, and many within the military structure are loyal to Bashir. Not surprising since President al-Bashir has a lot to lose if he gets pushed out of power, wanted by The Hague, he could very well see prosecution if any new government decides to surrender him over to the ICC.

The President himself has not bowed to the pressure of the protestors, claiming that the only way for there to be any regime change within Sudan is through elections. On Monday, during a visit to South Darfur, Bashir stated that demonstrations will not change the government, insisting that the people must wait until the elections in 2020 to vote on any possible change in administration. Many are questioning whether Sudan has a revolution on its hands, one akin to the 2011 Arab Spring. However, with the knowledge of hindsight, I imagine there’s a lot of scepticism in onlookers. The Arab Spring revolutions weren’t completely successful, and in some cases lead to massive national strife, one of the worst being the Syrian Civil War, the consequences of which we are still dealing with today. We can only hope that this does not lead to a civil war situation akin to Syria, and that cool heads do eventually prevail.