Buttigieg is a white, male, moderate democrat. So, what makes him radical? Buttigieg is the first openly gay man and first millennial with a chance of entering the oval office.

For Buttigieg, a former mayor of South Bend Indiana, getting this far in the democratic race is admirable, but the prospect of him becoming the democratic nominee, let alone the president, was unthinkable.

Since the start of the democratic race, Buttigieg seems to be squeezing the other moderates in the competition such as Joe Biden and Amy Klobuchar. This has only become more apparent in the New Hampshire Primary polls since Buttigieg had his breakout win in Iowa. Seeing Buttigieg leapfrog both Biden and Warren to second place at 18%, although a far cry from Bernie Sander’s 26%, this makes him the first choice for many moderate democrats. Making the prospect of a Buttigieg nomination a much more plausible possibility.

In terms of his practices and demeanour, Buttigieg seems to embody the traditional democratic establishment, but his policies, even during the Obama era would seem unthinkable. Healthcare policy is a tell-tale way is evaluating how ‘radical’ a candidate is due to how polarising this issue is in US politics, with the RealClear Opinion Research Group finding that healthcare is the highest-ranked issue for US voters but also the most polarising. Thus, making it a potential heavy vote looser. Buttigieg’s plan ‘Medicare for All Who Want It’ allows for the continuation of private healthcare while providing a public alternative with comprehensive coverage, not unlike the healthcare system in the UK.  While this co-habitation of public and private healthcare may seem commonplace for us in the UK and Europe as a whole, the idea of a public and taxpayer-funded plan for anyone to use in the US would be a healthcare revolution. Something Obama, who was seen as a radical left-wing democrat in 2008, did not introduce. 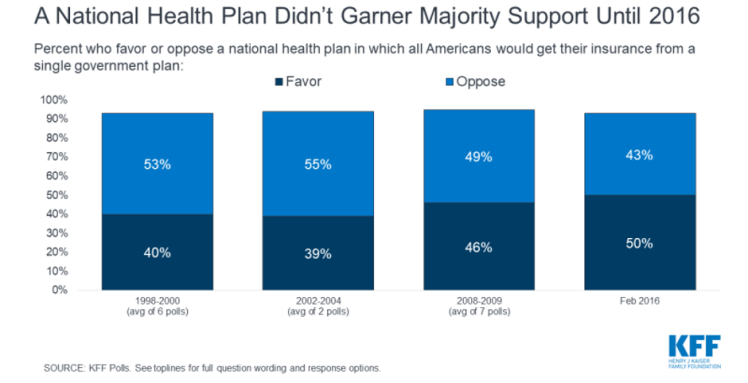 The fact that Buttigieg supports a universal healthcare system when the idea only holds a 50% support rate, sets him aside from other moderate democrats like Klobuchar and Biden, who have both kept their own idea of what a public healthcare plan would look like vague.

“What about Sander’s ‘Medicare for All’?” I hear you ask. It’s important to note that Sanders historically has not been a democrat. Serving as an independent from 1981 to 2016 both in his role as Mayor of Burlington, Vermont (ousting the Democrat incumbent) and as Senator of Vermont. So while Sanders is undoubtedly radical, he traditionally is not a democrat. This doubt from other Democrats came to a boiling point forcing him to sign a “loyalty pledge” to the democratic party and that he would serve as a democrat should he become president – we will not know for sure if this is the case unless he reaches the Oval Office.

This leaves Warren as the only Democrat with a more radical plan for healthcare than Buttigieg. Placing Buttigieg on the radical side of the democratic field on one of the most polarising issues of this election.

Looking past what can be a very thick veneer of left-wing echo chambers, especially those that would consider themselves the left of the democratic party, Buttigieg is radical, at least for the US and lines up with the likes of Sanders and Warren on a number of issues. A $15 an hour minimum wage, quadrupling the earned income tax credit for single adults, “affordable, universal full-day child care and pre-K for all children from infancy to age 5”, route to citizenship for undocumented immigrants, a cap on all student loan payments as a share of income, forgiven in full after 20 years as well as a universal healthcare plan. Furthermore, Buttigieg has thrown his weight in with some major structural reform ideas such as statehood for Puerto Rico and the District of Columbia, banning gerrymandering, and putting an end to the electoral college and filibustering. This would be major changes to the way that US elections are held, and could have major impacts on future results, as both Bush Jr and Trump would not have won the presidency without the electoral college.

Buttigieg may not have the same ideas as Sanders or Warren but to deny that his ideas are radical and would not have major long-term effects for the US only because he is seen to be moderate on the surface is precisely the problem. Buttigieg is a liberal able to come across as a moderate, and is it not the job of the nominee to convince those on the other side to vote for them? Only by accepting that they must convince those on the other side will the democrats be able to enact the radical policies they so desperately want.